Wayne Nguyen truly outdid himself as this year’s Ocean Nationals was the biggest ever.  A strong following of former NBL League and Kickstart champions added to the overall prestige of this September 21, 2019 event.  It looked like the entire TKO organization attended and filled the South hall of the beautiful San Luis Convention Center. 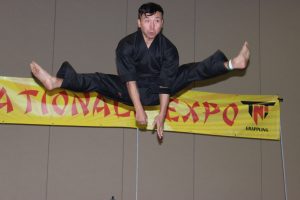 There were a lot of Texas Martial Arts celebrities present as well as a host of schools with top competitors. So many people were on the competition floor that I had to squeeze between them entering and leaving the competition area.  There were 170 karate divisions, breaking divisions and a stick combat invitational that lent to a completely action-packed martial arts adventure.  I don’t think anyone could have walked away from this great event without having been entertained or competed against some of the best in Texas.

Some of the Highlights from competition pitted great champions of the black belt divisions against each other. There were so many divisions running at the same time that I found myself having to jump in and judge for a good part of the day while trying to report and take pictures. 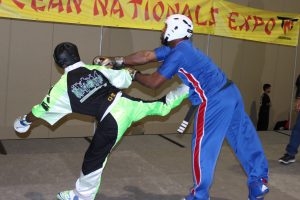 It was a long day and believe me Judging can be just as stressful as competing. So much was at stake for many competitors and there was bound to be controversy and there was but all issues were not a problem and resolved in a sportsmanlike demeanor. The competition was fairly judged by top staff filled with past and present champions.  The event was run efficiently and with a prompt conclusion to its divisions. With so many divisions and people, it amazed me that things concluded before dinner time.

I believe the TKO is a well-attended organization that is supported by its 14 promoters, the League National organization and 16 total tournaments with 3 of the tournaments being Wayne Nguyen’s events. I have attended and competed at this tournament since its inception in the 1990s and is one of its longest supporting champions and reporters I can say it’s never let me down and always amazes me. Rommell Gargoles was the adult Kata Grand Champion and Jiran Walker was the men’s Sparring grand champion. The complete results can be seen on the TKO website by clicking on the tournaments online registration and then clicking on results, This year’s 2019 TKO State Championship will be held at the Reliant Crown Hotel on November 15th and 16th.

Saturday October 8th 2011 was the date of this 12th DFW Karate Championships. Dewey Sutton once again out did himself. With the help of his army of helpers and AOK officials he was able to […]

New Orleans is back. As I drove to Pee Wee Blanco’s NBL National Karate Tournament I felt the uneasy anticipation of competition as well as the unknown expectation of what I would find in New […]