This years state finals were held in Austin Texas on December 3rd and 4th at the 21 story downtown Hilton Hotel main ballroom. I believe this was the nicest place I have ever been to for an AOK State championships. The hotel is located two blocks from 6th street and in the heart of downtown Austin. Opulent and classy surrounds you the moment you walk in. The rooms were equally awesome and made the whole stay feel like a carnival cruse without the water. 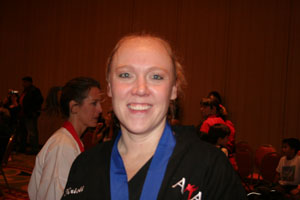 All of the tournament producers were on hand to supply all the help needed for smooth execution of operations during the weekend. It seems hard to believe that 640 competitors attended and all by invitation only. You had to qualify during the previous years competition just to attend. Most tournaments this size have at least 50% of its competitors show up at the door. This was the largest Texas Amateur Organization of Karate state championships ever. Including the spectators over 1200 people were in attendance over the two days of the event. 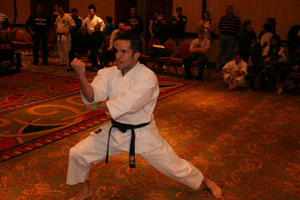 Black belt adult weapons was one of the starting divisions. Several world and national champions were vying for the state title. After the final competitor ran it was apparent that Johnnie Murphy and Eric Cantu were tied. After a second run Johnnie Murphy and his dynamic sword routine won the black belt adult weapons division. Eric Cantu came back in the black belt specialty kata division and won the state championship. 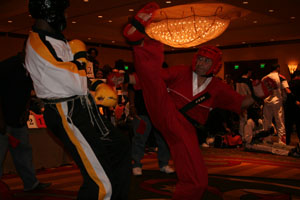 Junior black belt specialty divisions also ran Friday night. Sebastian Pedroza was the 11 and under black belt specialty champion. The older 12 to 17 years old specialty included and array of weapons and kata. Everything from staffs and swords to Kama and open hand forms with music. Judging this division was not easy because all these kids were great and possessed a high degree of skill in there forms. After a long series of competitors, Ciara Garcia emerged as this years black belt 12 to 17 years old specialty kata champion.

Black belt junior open hand kata divisions also were up. Sebastian Pedroza won his second division as he took home the 10 to 11 year olds black belt kata championship. Another multiple junior black belt champion was Ciara Garcia as she was this years 12 to 13 years black belt kata champion. Isaac Campbell was the 14 to 15 years kata champion and the karate family of Garcia legacy pulled down another state title with Samantha Garcia winning in one of the biggest junior forms divisions of the tournament. 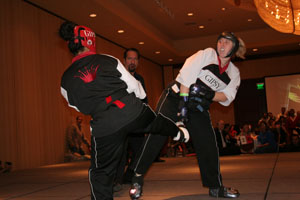 Saturday morning had the grand ballroom totally packed. Most of the day you could hardly find a place to stand or sit in this enormous ballroom. All the junior and senior under black belt kata and sparring divisions were up. They represented the bulk of the tournaments competitors. Large divisions were ran efficiently by expert Texas AOK promoters and judges. By the late afternoon most of the under black belt divisions had finalized.

Black belt sparring was up last during the Saturday festivities. These junior black belt champions were Blair Benton 10 to 11 boys sparring, Sophia Romero 10 to 11 girls. Other Junior champions were Robert Anthony 12 to 13 boys sparring, Clarissa Rodriguez 12 to 13 girls sparring, Danielle Palomo girls 14 to 17 sparring, Timothy Wiggins boys 14 to 15 sparring and my main man Rommell Paul who was totally awesome for his win in a tough boys 16 to 17 sparring. 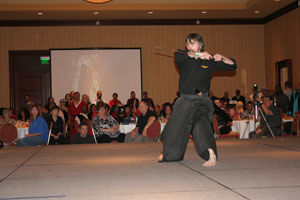 The men’s black belt sparring divisions finalized the days competition as the legendary Peter Chartouni was first in the men’s light weight sparring. James Davidson ended up battling it out with Jason Chartouni in the final fight for the men’s middle weight sparring division. In a fight that went back and forth and was action packed, James managed to pull out a narrow victory for his title. Jason Matthews was the men’s black belt heavy weight champion. 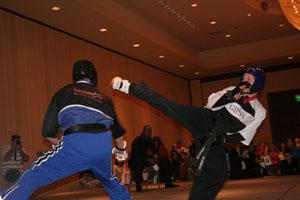 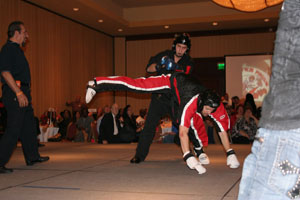 The night time finals and banquet was held later that night. Great champions displayed their kata. Also final fights in the adult black belt divisions were finalized. The food served was of the finest quality and as the Golden Greek hall of fame awards were given out I could only feel that this was the classiest and best AOK State championships ever. Congratulations to Nelda Edwards and the entire AOK organization for the best ever state championships.

Golden Greek award winners for 2010 were presented to the junior, adult and senior competitors. Mike Hill and Sheryl Quick won the executive male and female Greek award. The adult Golden Greek award was given to Matt Tyler male and Martha Garcia female recipients. The junior Greek winners were Sebastian and Ciara Garcia. Congratulations to these black belts for all there dedication and hard work through out the 2010 year.

For over four decades the Texas Amateur Organization of Karate has reigned as the longest and most prestigious sport martial arts organization in the US Southwest. There is an old saying in the martial arts […]

For forty Years Jose and Sharon Santamaria have been giving one of the best ars of tournaments in Texas. Originally connected to the Texas AOK then NBL and later in the 1990’s it became the […]

This tournament has got to be one of the longest running Texas AOK tournaments. I personally have competed in it for most of its 41 year history. In years past it was held in several […]