This tournament has got to be one of the longest running Texas AOK tournaments. I personally have competed in it for most of its 41 year history. In years past it was held in several places including Fonde Rec Center downtown, Humble High School and for about the last 10 years has been ran at the prestigious Humble Civic Center. 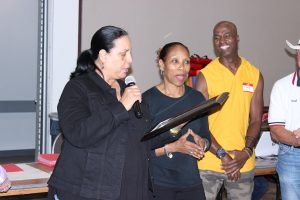 Grandmaster Linda Denley was the promoter of this April 13th, 2019 martial arts extravaganza. Linda is a living legend and needs no introduction anywhere. In the 1970’s she fought in in Madison Square Gardens in New York City on TV in front of thousands along with many past icons of the martial arts in the world. She was the terror of the women’s black belt full contact fighting division. Linda received several Life achievement awards and was honored for her great achievements from several organizations at this event. I don’t want to go on about her but her attendance at any event elevates it.

Many dignitaries from around Texas and the country were there to assist in the tournament. Some of my favorite Grand masters were there and at least 15 were present. I was also competing at this event and believe that martial arts is for all ages. I believe we should all be on a quest to be our best. I’ve always found preparing and training for competition keeps you fit and healthy. In 2014 my good friend Master Larry Lockhart remarked to me that you’re never too old to compete and that it gives us better health.

The tournament started on time. Accommodation was made for all competitors to access their divisions. The children’s divisions were filled and I saw great competition from eager youth. Future great martial artist were vying for the coveted 1st place Space City championship honor.

Without going into who won what I will say amazing performances and matches finalized in one of the best events of the year so far. The complete results can be seen on the AOK’s website at www.aokstrong.com. The rings I competed in were full and all the adult kata and sparring divisions were fielded by the current AOK’s best champions. The final Grand champions were Master Travis Owens who won the forms grand championship and Charlston Green was the men’s sparring grand champion.

Congratulations to Linda Denley and the AOK organization for a great tournament that was fun and offered quality competition.

Master Paul and his amazing organization have once again produced one of best attended events of 2011 Texas sport Karate. With a Texas AOK – B rating and an SKIL – A rating. This tournament […]

Most people are unaware of the latest union of two great champions. Dawn Kabela and Luis Jamenez were married earlier in 2006. This marriage united a powerful Mexican dynasty with one of the biggest karate […]

Once again I find myself at Texas City, a Mecca for south Texas Sport Karate. Why this little city south of Houston is so predominant in the martial arts scene has to do with its […]